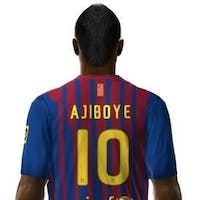 This is a beginner tutorial in understanding React Hooks and the Context API. In reality, this is more of an attempt to explain these concepts to my self and to interested readers. This will be in two parts with this first part focusing on the basics of hooks. The other part will hopefully focus more on more advanced use cases and the Context API. We'll implement the search functionality and convert to using the Context API for managing states and avoiding props drilling

How are we going to learn?

We'll look at some contrast on handling the same state logic with a class component, and then with React Hooks. We will be building a Recipe Search application to solidify the concepts, we'll then have a bottle of red wine to celebrate😃. I believe messing with the code is the best way to learn.

Final Version of what we'll be building

We'll build a simple clone of the food2fork website. This will not be a fully fledged version of it, but we'll use their API with the top 30 recipes. Add some UI logic of our own just to mess with the states and see how we handle them with hooks.

So what is a React Hook?

First things first, so what is React Hook? From documentation

What is a Hook? A Hook is a special function that lets you “hook” into React features. For example, useState is a Hook that lets you add React state to function components. 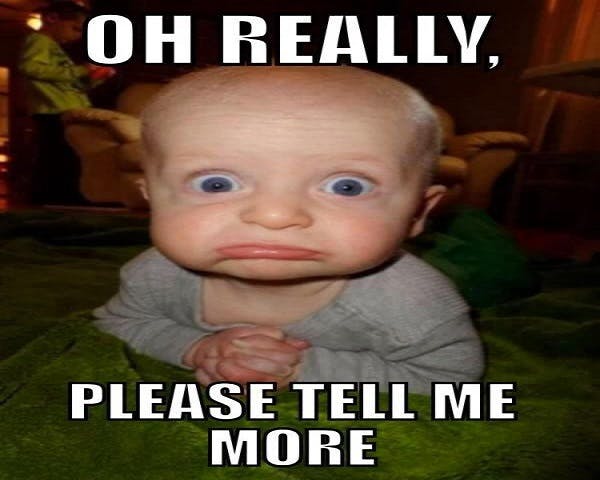 In simple English, hooks allow us to "hook" into specific React Features. For example useState as the name implies helps us to use state feature in React where we otherwise wouldn't be able to use it, i.e inside a function component. We'll explain a little bit in details the syntax usage etc through building the recipe search application.

We'll be using create-react-app to bootstrap the application. I have created a repo with a barebone create react app that we can quickly get started with. Simply clone to follow along. Run the command below:

Going back to the app we'll be building. We shall be using the food2fork API to fetch and search a list of 30 top recipes. However, the API has a limited query we can make per day. I have created the exact JSON response from them for this tutorial. This will be served from here here so that we won't be hitting their server too frequently.

Let's create the component folder in our src folder to hold the different components our app is likely to have. Take a moment to think about that, there will be a component displaying each Recipe, a RecipeListcomponent to render a list of the recipes, a RecipeSearch component and RecipeDetails component for displaying additional details for each Recipe. All components will be functional components, since using hook is the point of this tutorial.

If you did everything correctly, you should have a folder structure like below. You can also clone the second branch in the repo here to jump to this point in the tutorial. 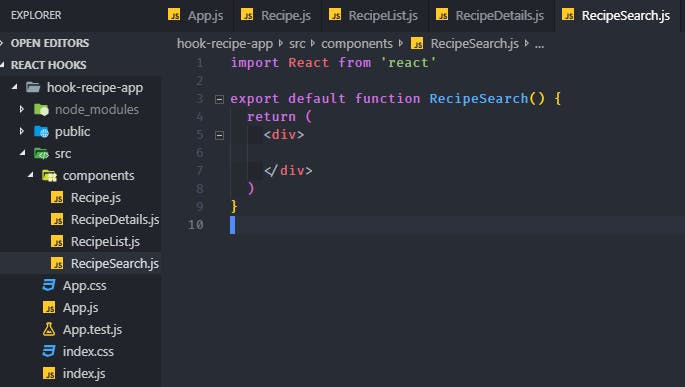 If you have not already, one extension I will recommend installing is the ES7 React/Redux/GraphQL/React-Native snippets. It speeds up your React development by allowing you to type shorthands to get some React Snippet. You can find out more here

So let's get Hooked

One of the most common things you will do in any frontend application is fetching and displaying data, and manipulating UI based on UX. React is no different. One of the common use cases of state is to store data from an API call. Before hooks, if you needed to have a state of any type within your app, you absolutely have to use a class component. You'd also need to fetch data asynchronously within the componentDidMount lifecycle. For many, this isn't a mighty problem, but the React team believes it gives rise to the tight coupling of component logic. Also in more complex apps, it is hard to reuse stateful logic. Don't take my word for that, just read the motivation for hooks here

Let's look at how we'll handle fetching data from the REST API I have created in a classical component, before moving to how we are going to handle it with hooks

There are a couple of things that are obvious right away, we have imported useState and useEffect from react. These are the APIs exposed to us that enables us to use React Hooks. The useState Hook accepts the initial state. In the example above we have initialized it into an empty array. We expect to populate the array with data from the API call. This is equivalent to below in our class component.

Furthermore, the useState returns a pair of values to us. They are the current state and a function that updates it. So we get back [currentState, setStateFunction] from the use state. That is why we have written const [recipes, setRecipes] = useState([]) in our application. Where recipes is an array to hold our recipe data. setRecipe is the function that enables us to update the state, this is equivalent to this.setState in a class component.

In case the syntax looks confusing, these are not React specific syntax, but plain ES6 Javascript. This is known as destructuring. Since the useState returns a pair of value, we have destructured it into an array. The name we choose for them does not affect their behavior, it is simply good practice to name them as [name of your state, set+name of state], hence we have :

If you need some refresher or primer on destructuring, I have written a little bit about it here.

Another Javascript feature we need to take note of to fully understand what is going on here is closures. Due to Javascript closure, we have access to the destructured variables from the useState anywhere within our function. Hence, inside the fecthRecipe function and anywhere within the component we can use the setRecipe or any other variables without having to call it this.setRecipe etc.

For the purpose of this tutorial. A simplified definition of closures is that it gives us access to the outer (enclosing) function's variables—scope chain, and also to their return values.

You can read more here, here and watch here

Let's quickly pass the props down our components and get them set up to display the list of Recipe. Since this isn't a Hook specific feature. I am going to skip it. You can find the updated repo up to this point here. I have also added styling to speed things up. The updated repo is on the third/hook-in-app.js branch in the repo.

At this point, your App.js should look like below, we have simply passed down the recipes array inside our state as a recipes props to the RecipeList component. Note, I have also added a loading state with the useState and set it back to false after data is completely fetched. This the first example of using multiple states.

Next, let's move to the RecipeList component and see what we have.

Here we have simply received the recipes passed as a prop from the parent App component and immediately destructured it --see line 5. We then mapped over it, pass down each recipe to the Recipe component as prop. Nothing particularly interesting here.

Now to the fun part.

Inside the Recipe component, I have added some contrived states that are simple enough to fully understand. We'll make an attempt to go line by line, trying to understand what we are doing and how we are handling stateful logic with the useState hook . You should have the below in your Recipe component.

Let's understand the code above. Like previously, we have received the recipe as a prop from it's parent component which is the RecipeList we have then destructured it immediately within the function argument. We then went ahead to further destructure the parts we intend to use from the recipe object. I know what the recipe object contains because I have tested the API, so this isn's some magic. This is equivalent to below

Now to some useful state. If you checked the application. You'd realize that when we clicked on the more details button we get the extra information related to that recipe, specifically the list of ingredient and the social rating. Take a peek at the gif on top for a refresher. So we need some kind of state to handle the desired user interaction.

Think about it for a moment, we need a way to toggle between if more info should be shown or not. We also need a way to fetch the info for the specific recipe. The desired result will then be stored in some kind of state. Viola, we have identified at least 2 states. Hence in our Application, we have a showInfo and a recipeDetails state.

With the information we have, let's use the useState Hook to work with this.

That's hopefully simple enough, we have set up the initial states. And prepared for handling state change with setShowInfo and setRecipeDetails.

Moving to the handleShowInfo function. This is an async function that basically helps to fetch data. And also handling state change to show the info or not. Let's take it apart line by line. Since we intend to call handleShowInfo on click of a button we have access to the event object. Inside the button, we have set the recipe_id as a data-attribute. This enables us to grab the id for the specific recipe. Inside the handleShowInfo, we then get hold of the id by extracting it out of the event.target property. Since we need to get additional info, there is a need to make an HTTP request with the id. This is what we have done next and awaited the response. We then converted the value to a json and store the value in const recipe.

Note: You may need to get an API Key from food2fork. The current key will probably be out of limit.

The recipe we get as response is the slotted inside the setRecipeDetails to serve as and updater for the recipeDetails. At this point, we have simply set the state of recipeDetails to the array response variable recipe. This is equivalent to

Another thing is that we set the value of showInfo to the opposite of what it was. This is what creates the toggle effect whenever the button is clicked. This is equivalent to.

And that's about it, in the returned jsx we conditionally rendered the info based on the state of showInfo when the button is clicked. We have additionally mapped over the array of ingredients to display them as the additional info.

This is the end of this very basic introduction of hooks and perhaps an oversimplification. In the next iteration of this series, we shall examine hooks in more details and then learn the Context API.

Hope you enjoyed the introduction. Feedbacks are welcomes. Stay tuned for the next update and see you soon. Thank you! 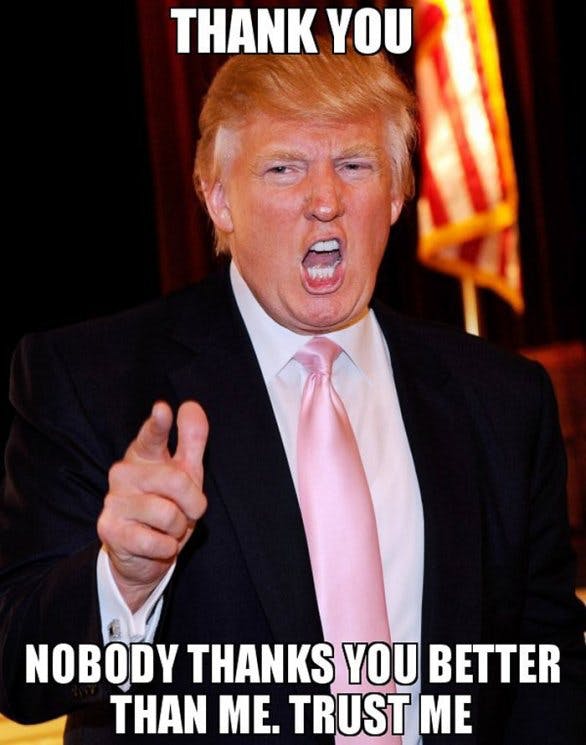